10. A Cottage Pre-School by Janet English

“Teacher’s role is tutoring, coaching, setting of questions, supporting. We have a very famous approach – scaffolding.”

In the middle of the forest there is a preschool/kindergarten that has no running water, no electricity, and only a stove for heat.  It’s a cottage school and the children have their classes outside even if it’s raining, snowing or many degrees below freezing.  If it’s cold, the children put on another layer of clothes.  If it’s wet, they wear a layer of plastic.  Every day, as is the Finnish tradition, the children are given a warm and healthy lunch.  For these children, their warm lunch has to be delivered to the middle of the forest. 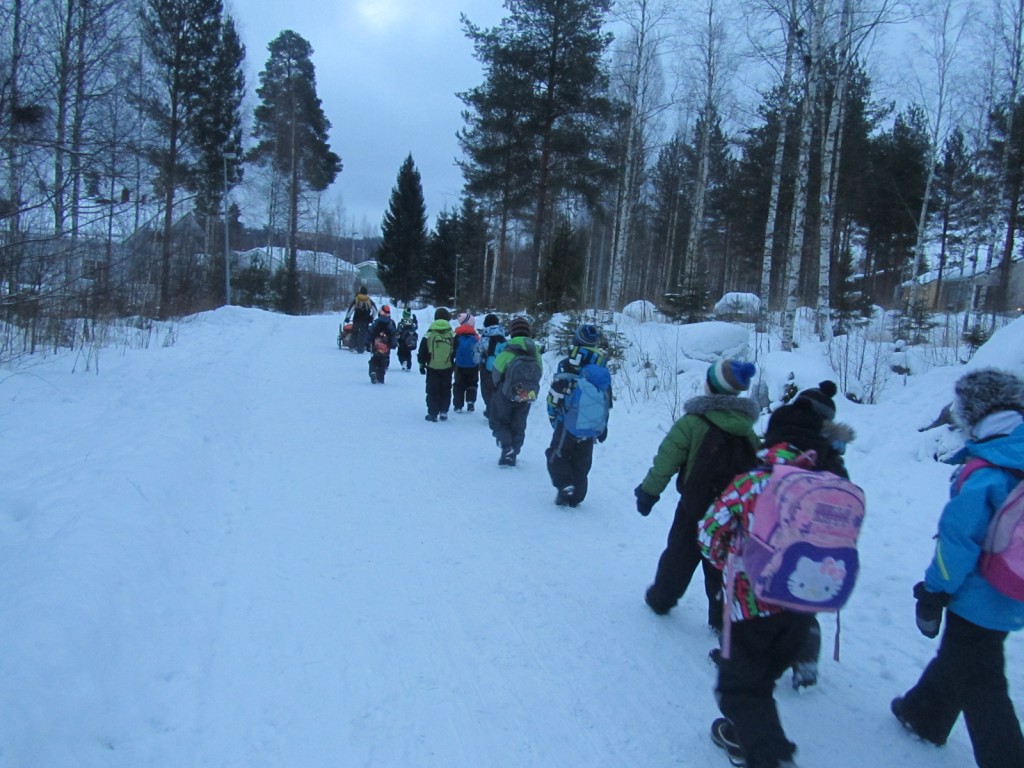 Even by Finnish standards, this remote and simple school is an exception to the rule.  This may be the only preschool/kindergarten in Finland like this.

Unfortunately I wasn’t able to visit this school myself;  there had been so many visitors to the school that the teacher had to ask visitors not to come.  Sari-Havu-Nuutinen, a researcher from the University of Eastern Finland, told me that when she visited the school the children had been studying snowflakes – they caught them in the air, they observed them with a magnifier, and they compared the snowflakes with pictures in a book. 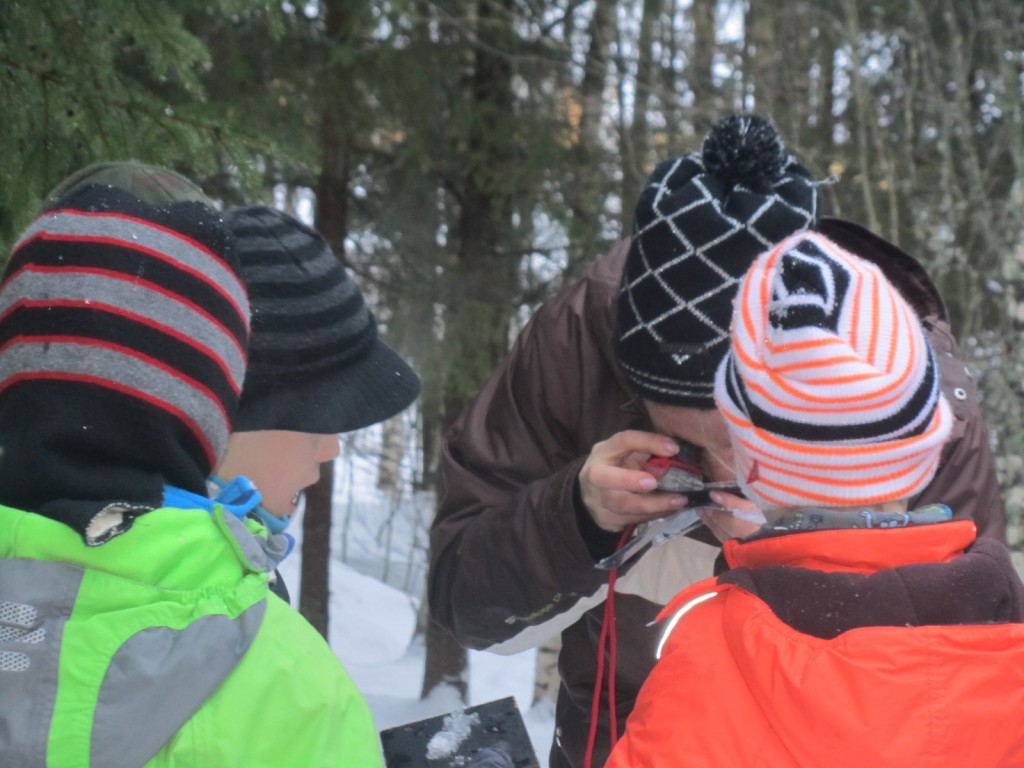 Students packed one-liter containers with snow, heated the containers over a fire, and tried to figure out why each container left behind a different amount of liquid water. 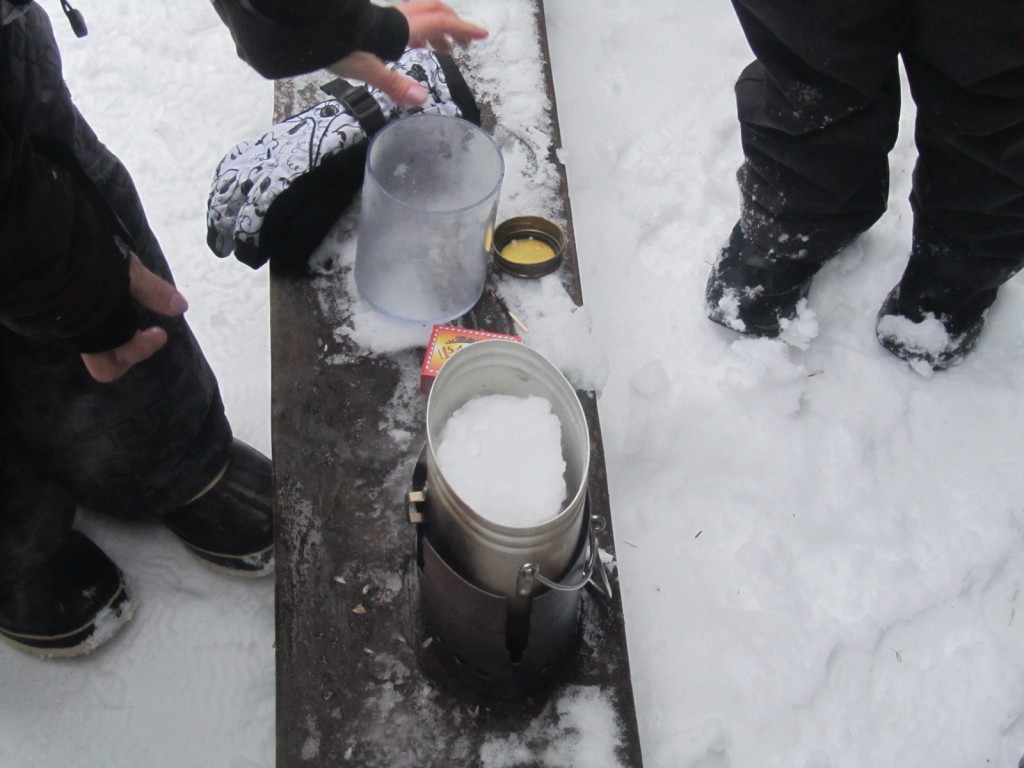 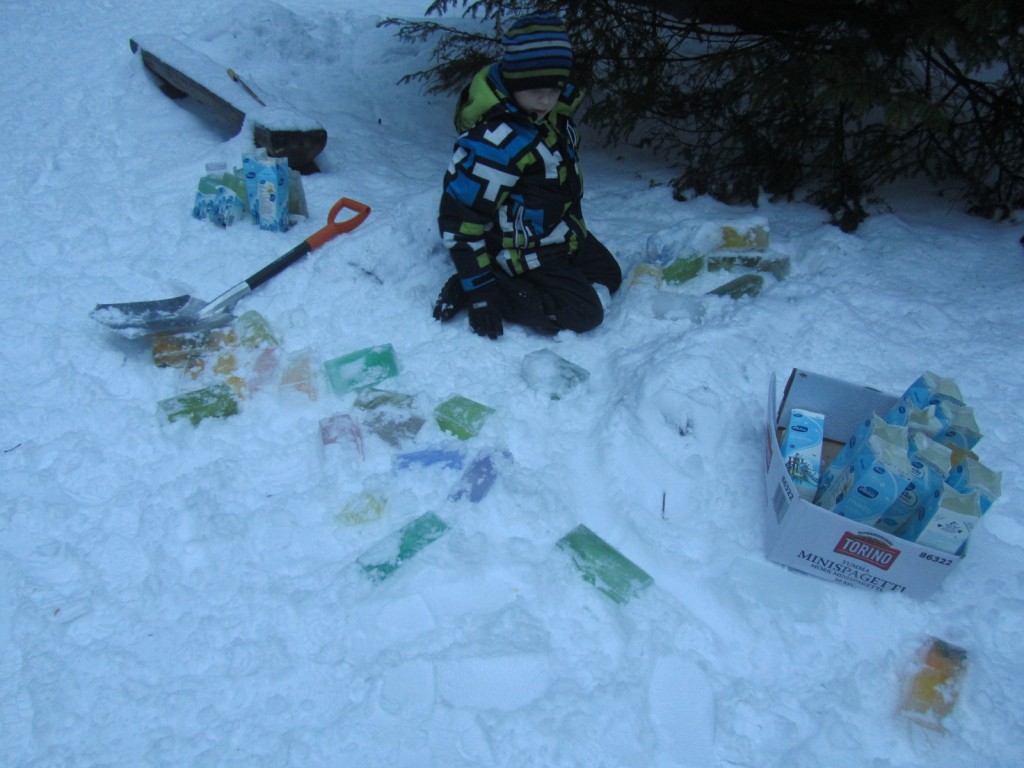 They used milk cartons to make colored ice blocks and sculptures, and built sticks their own height to find things in the forest their same size.

Sari and I had long discussions about how Finns approach early childhood education and the name of the Russian theorist, Lev Vgotsky, kept coming up.  I found Vgotsky’s pedagogical approach to be consistent with the teaching methods in many of the compulsory, high school, and university classrooms I visited throughout Finland.

What is the role of the teacher in this environment?

“Teacher’s role is tutoring, coaching, setting of questions, supporting. We have a very famous approach – scaffolding.  It is a lot of scaffolding – setting new environments, new tools, new materials for the children to go on their own. It’s not giving answers or presenting the answers; it’s just providing the learning environment for them.”

Can you give me a specific example of what children had to solve and what the teacher did?

“In the early years there are many typical…problems.  In this time for example I always say to the teachers the winter is a very special time for us and (the) seasonal changes, for example. So in short experiment, for example, we can look at the state of water, we ask children to go outside and explore the snow and then they go out and look what kind of snow and what we can do and then they notice, “Teacher, the snow is melting!  We don’t have any snow!” And then we can say, “Why is it happening?”  So the role of teacher is setting the questions, “Why” especially and then they probably set a question or answer and then the teacher can provide “Let’s try! Let’s make an experience” and the children often, because they are curious and they are interested in these things they want to go on.”

So when you were at the cottage school a few weeks ago, can you explain to me what the teacher did with them with the cartons?

“Yes, they had the same kinds of activities but they started with the snowflakes. They tried to pick up the snowflakes in the air to the black plastic plate and they looked …at the shapes of the flakes and they compared with information from the researchers of the snow.  They have found different kinds of flakes and they have explained how these flakes are constructed in the air so the children try to compare which kind of flakes they can find and they draw them down and make their own drawings of those flakes. And after that they took more snow – not only one flake but more amount of snow to the different kind of plastic bowls … round ones, square ones, and they put one liter for each of them and they measured how much they had snow, and then they heated it with … a camping cooker. Then they counted how much water, how long it took to become water, what they can see – if there is (smell), if it is moisturizing. Then they noticed how much water they had and they went to draw the amount of snow, and compared from that snow how much water they had.”

What did they figure out?

“They figure out how one liter of snow it’s coming only 3 dL  to the water and then they discussed what is the reason for that shortly because it’s liquid, it’s the different state of the substance so it’s changed.”

Do they all get 3 dL or do they get different answers?

“They have different answers but they were quite happy for those answers they found themselves. Teacher didn’t give any right answers for them.”

“That’s right.  A bit different because also the density of the snow differs between the groups because some of the students put much more snow inside than others and then they compared. Does it make any difference?  Yes!  One group had only 3 dL water.  Other one had half a liter of water.”

“Before we went there they had had already … ice art so they had put water inside one liter milk boxes and put them freezing outside and they opened them and used these blocks to built a new art by themselves.  So this ice – this thematic area for these couple of weeks – they had snow and ice and water, the different states of water to become familiar with those issues.  That was for 5-6 years old.”

9. Candles on the Doorstep

11. Night as a Winter Animal