“Problem solving probably takes place every day in the classrooms in Finland….” 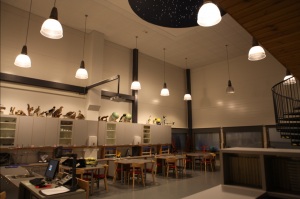 Adjacent to the wood shop and next to the fireplace is a science lab with a ceiling two stories high. An image of the Joensuu night sky spreads across the ceiling and pinpricks of light shine as stars when the hanging room lights are turned off.  Around the edge of the room  are sinks, counter tops, round tables with chairs, microscopes, and a few dead and stuffed Finnish animals propped up on shelves and countertops. When I walk into the room I feel inspired and curious, but also nurtured, as if the people who designed this room want to show that learning is valued.  (I learned later that students helped design this building.)

Third grade students sit in chairs around the room and each one works on an iPad. They see me walk in and look me up, then down, and get back to work. 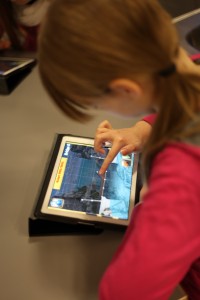 I speak quietly with the teacher, Sampo Forsstrom, and ask if it’s okay to visit and take pictures. He welcomes me and I walk between desks and look over the children’s shoulders, watching their fingers slide across the touch screens, dragging and manipulating line segments to make bridges. Most students place the lines in triangular shapes but each child creates their own bridge design.  The students do not talk, they do not move around, and they do not disrupt the classroom environment. When I take pictures it makes them squirm so I stop.

Sampo walks around and checks their progress and when it seems time, he gives them the next set of instructions which is to open an iPad application called, “How It Works: Machines by Geek Kids. ” 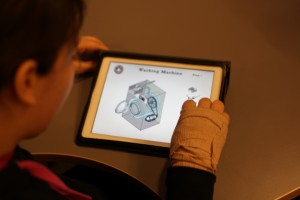 The target of this lesson is to line up the working parts of mechanical objects like rockets, a washing machine, or a hairdryer and see if they can “build” the machine and make it run properly.  If the parts are aligned correctly, the machine will run and animate, but if they are not aligned correctly, it won’t work. Some students choose to build rockets, others a hairdryer, and one chooses to build a washing machine. Students get to choose what interests them and this choice is something I saw repeatedly throughout the Finnish system.   It helps keep the students focused. 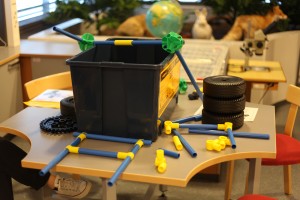 Their new target is to build and design their own chair. Sampo doesn’t give them any instructions and there is no rubric. The students begin building with great focus but all at once the children put down the construction pieces and run outside!  Where are they going?  It’s recess and this happens every forty-five minutes! Children get fifteen minutes of play for every forty-five minutes of schoolwork and they can’t get outside fast enough!  They hop and shuffle toward the door, and wiggle into their winter coats and slide on their boots as they go. 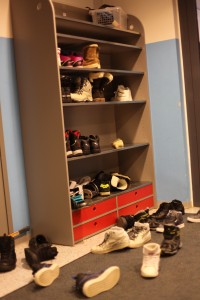 In the school yard the children start games of snow football (soccer) and something that looks like ice hockey without skates. Others play King on the (Snow) Mountain, go cross-country skiing or  play hide-and-seek. Where is the supervision? I’m uncomfortable because my American teacher training kicks in and I feel like they should have someone to supervise them. 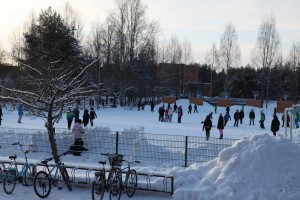 Clearly, I’m the only one who feels that way.

I return the next week to ask Sampo how he uses the national core objectives to design lessons and teach problem solving skills.

What does the national curriculum tell you to do?

“The national curriculum probably would say you have to study structures and … that’s probably it. And then we have the school’s curriculum that is based on the national curriculum and there, for example, in the lesson I was giving last week, we have a technology-like emphasis on handicrafts….We used some mechanical programs where we would simulate the structures of bridges and such and then we would build them after that.”

“So problem solving probably takes place every day in the classrooms in Finland and we try to teach things we do by of course taking all the things into the pupil’s lives and try to think of phenomenons… which they bump into and try to get the curriculum to clasp with that. Well, that’s one way to look at problem solving.

So give me an example of the three things you did in that lesson.

The first thing we did – I started to talk to the children about the built environment which we have around us and how we actually don’t realize … all the things we have around us. The only time we realize it is when something doesn’t work and then you start to think, ‘The light switch doesn’t work,’ or, ‘The light doesn’t turn on. What’s wrong? What is this?’

And then we started with that and moved onto the topic we had that day. Actually, I started with the roller pen, which has a lot of technology built into it – there’s a roller and a spring and all kinds of things. And then we went into … what kind of bridges they see around them. ‘What kind of bridges do we have in Joensuu?’ And then we started talking about that and after talking we took the iPads and worked with the bridge constructor…for about 20 minutes. After working with them they got the basic idea of what they should do with their structures … if they want to make them strong. And then we work with building sets but they didn’t build a bridge they built a chair. And then we talked about the chairs. So if the children could take the things that we talked about and what they learned with the iPads into practical use and some took that into consideration and some didn’t.”

At this point I have to ask a question that Finnish teachers never seem to understand.

“The content of that will not be on a national test…..We won’t test. If we want to evaluate that kind of thing I would maybe tell the children to write a report or a presentation, for example, with the use of technology about what they did. So they would start with maybe taking a photo of a bridge and then writing a few lines about what they learned by using the iPad and then have a picture of the plan of their chair and then the outcome of their chair. They might give a presentation about their project and then I would evaluate their project and their feedback of how they took the things into consideration.”

What happens if someone came in and told you didn’t have the freedoms you have now as a teacher?

“I would try to live with that.”

Okay, fair enough. What can you do?

What happens if it got to the point where you felt you were making little robots out of the children?

“Ah, then I’d probably go sell shoes or something. I haven’t thought about what .. I will do when I’m big… when I’m an adult.”

Well, the reason I ask is because sometimes in America teachers are leaving…

They feel like they’re doing a disservice to the children – making little robots. They say, “I don’t want to do this. I can’t do this to the kids.”

“Of course. For example in England – the amount of evaluation… and what’s the point? You’re just trying to make results to make someone’s… and of course you’re based on the continuous evaluation that you’re a better teacher or you’re a worse teacher because the children’s points are lower than or higher than the others and that’s quite a difficult way of thinking about the teacher’s profession and I wouldn’t want to work in such an environment.”

“Yeah, I’d rather sell shoes. I’ve done it so it’s easy to go back – only a few days – but hopefully, someone will hire me.”

3. Moonlight in the Finnish Forest